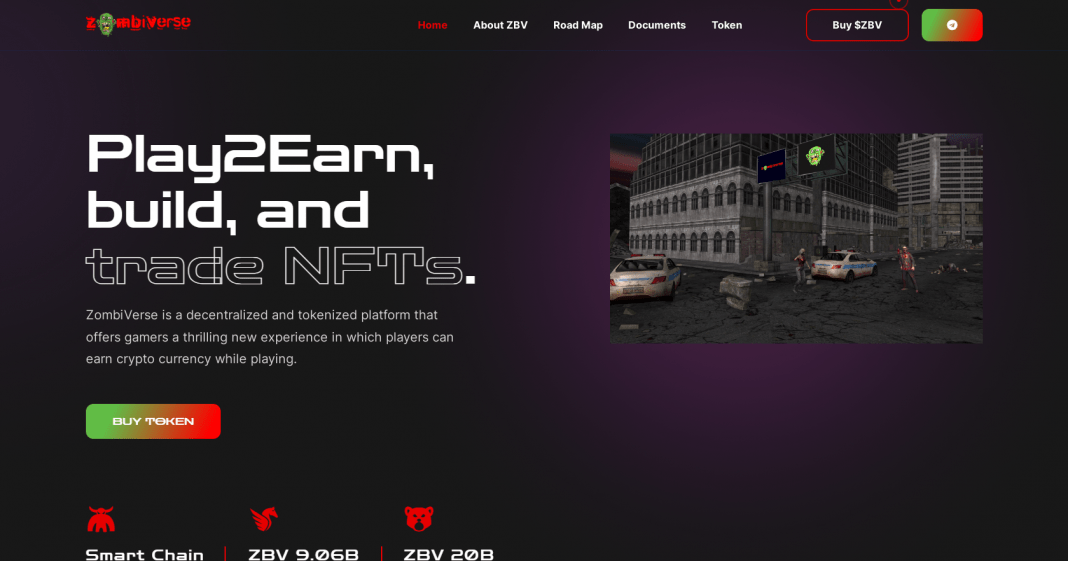 Zombiverse Coin is a 3D robotic play to earn (P2E) & build to earn (B2E) gaming token utilizing high precision AI applications and blockchain technology to model the character of legendary zombies in the metaverse. ZBV is a BSC contract token designed to link up with polygon network and futuristic features for expanded network accommodation.

ZombiVerse would feature multiple game trails with a Dead-man-walking chain which would be a public, open-source and permissionless blockchain with a fully de-centralized GameFi network with high speed and low fees. With ZombiVerse, you don’t just play, you earn while having fun.

Zombiverse Coin take you into the world of Zombies, a world where you fight for your own survival – a world where only the strongest and smartest players survive – a world where you earn more the longer you survive. Form groups, create alliances, become stronger and move through time. The game contains several territories, each with a different time perk.

Manipulation of game economy; lack of transparency; suspension of
players; data privacy. Limited creative freedom. All these often limits the user’s ideas and creativity, which can translate into a poor gaming experience.

Lack of opportunities to make money

Servers are prone to hacks and have poor performance

Most metaverses require users to spend a significant amount of money to
enter the platform.

Zombiverse Coin the NFT Marketplace, players and non-players can buy, sell, auction, exchange and rent out NFT items, which are regularly available in limited numbers and editions. Additionally, players can use NFT items in-game and sell rent or exchange them to other players. Players are also able to sell their account.

In the NFT Marketplace, players and non-players can buy, sell, auction, exchange and rent out NFT items, which are regularly available in limited numbers and editions. Additionally, players can use NFT items in-game and sell rent or exchange them to other players. Players are also able to sell their account.

The Zombiverse Coin Game Ecosystem consists of a dual token economy, based on a Deadman-walking Chain bridge with Polygon Network and uses NFT collectables. NFT items, such as vehicles, property and weapons, are used by players to progress through the game: trade, rent or sell them to gain profit. When you enter the game world, it is important that you have enough ZBV tokens as leverage for other players.

When you kill zombies or rescue other players, this leverage increases by 20% of the kill or rescue value. But be warned – it disappears if you are killed! A leaderboard shows the players with the highest leverage. If other players have weapons in their pockets when they are killed, these will drop and be up for grabs.

The Zombiverse Coin P2E game does exactly what it says on the tin: players are rewarded with cold hard cryptocurrency for winning battles and/or completing tasks within the game. ZombiVerse features a blockchain-based NFT economy and marketplace. The P2E game can be compared to some degree to Resident Evil, in that there are characters in the form of NFTs.

Players pit their characters against another player’s NFT, and the
winner receives coins that can be used to unlock power upgrades, which make the ingame character more likely to win. But here’s the thing: the coins are actually crypto tokens. These can gain value in the same way Bitcoin or Ethereum can, and players can cash in their earnings to use in the real world.