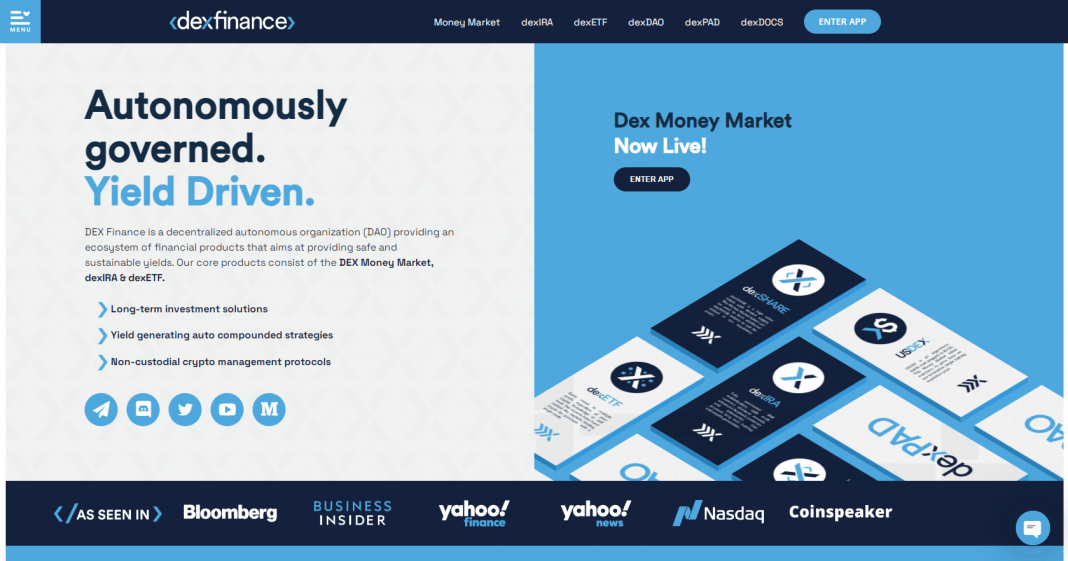 Dexfinance Coin Is an algorithmic stable coin with a built-in stability mechanism that aims to maintain USDEX’s peg to 1 USDC token. As part of a multi-token token system it is designed to be used as a medium of exchange within the Dex Money Market protocol.

What Is the Dex Money Market?

Money Market operates on a three token system designed to work in harmony with one another. The protocol uses advanced tokenomics to accomplish three primary objectives.

After presale the only new supply of USDEX going into circulation comes from the regulation pool (boardroom). In the traditional model, these tokens would be dispersed to boardroom stakers immediately every epoch based upon the TWAP.

In Dexfinance model, the stakers do not receive USDEX. Instead the protocol takes in all of the newly minted USDEX and then only sells enough to bring it back to peg. Once the protocol sells the correct amount of USDEX, those tokens (which are now counted within the circulating supply) can be bought or sold – so the protocol never sells (or puts into circulation) more than the treasury can buy back at the peg price.

The profits from the sale of those USDEX tokens are then converted to dexETF tokens and redistributed back to dexSHARE stakers. If these stakers decide they want to sell those rewards at this point they can do so all they want as this has no impact on the price of the peg token.

The Dexfinance Coin Money Market protocol controls the supply of peg tokens by only selling when the price is optimally above peg and only selling an amount that can be covered by treasury backed assets so the USDEX that was previously sold can be bought back if needed.

Where Can I Buy USDEX?

USDEX is available for trading on decentralized exchanges such as PancakeSwap. New to cryptocurrency? Read CoinMarketCap’s easy guide to buying Bitcoin or any other token.

Dexfinance Finance enables users to stake their tokens within a multi-step strategy rather than manually having to adjust for emission rates and market fluctuations. Investors receive a single receipt token which carries the same value as if they were navigating in and out of multiple farm pools. This increases the efficiency with which an investor can grow their position, and reduces the burden on them to be attentive to multiple strategies.

The team has successfully completed a private audit of the personal information. While this info will not be made public (yet), you can rest easier knowing they are now officially being held accountable for the actions by a reputable third-party service.

Dexfinance Coin order to incentivize users, Money Market tokens can be purchased at a discount in a process known as “Bonding”. Bonds have a vesting period to prevent users from selling all the discounted tokens at once for a quick profit. The list of bondable tokens includes currencies such as dexIRA and dexETF, ensuring consistent buy pressure for native tokens within the ecosystem.