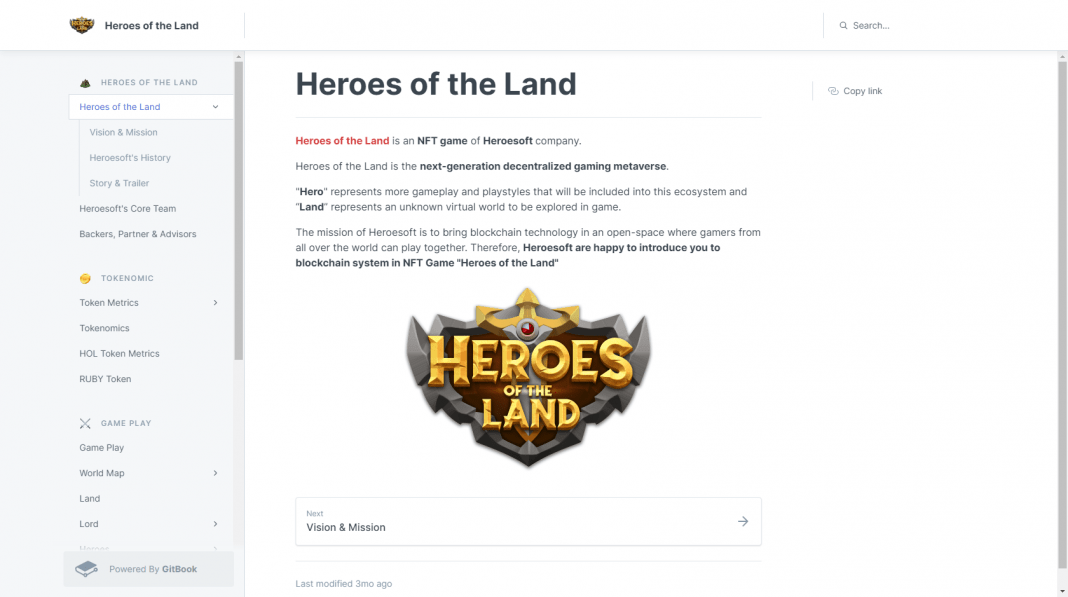 Heroesoftheland Coin is the next-generation decentralized gaming metaverse. “Hero” represents more gameplay and playstyles that will be included into this ecosystem and “Land” represents an unknown virtual world to be explored in game.

The mission is to bring blockchain technology in an open-space where gamers from all over the world can play together. Therefore, are happy to introduce you to blockchain system in NFT Game “Heroes of the Land”

Players can claim $RUBY token from Heroesoftheland gRUBY earned in the game. First $RUBY claiming requires Player Account to have been created for at least 7 days. After that, players can claim once every 7 days from a default datetime (Ex: if the default datetime is Monday, your next transaction will be on Monday next week). Transaction fee 5% fee based on $RUBY claimed will be charged in gRUBY.

Minimum chargeable fee: 5 gRUBY. When users transacting on the Heroes of the Land’s marketplace supply a creator code, they will collect 1% of the transaction’s value. $RUBY will be kept the value on Marketplace by using the Ecosystem Fund of $HOL Token (stabilize liquidity exchange to USDT).

Players & Collectors could earn $HOL and $RUBY in many different ways

Earning Heroesoftheland Coin in-game is depend on how you can get $HOL & $RUBY. With the benefit of blockchain and decentralization, players can now create some values while they are playing. These values can be exchanged like cryptocurrency. Nowadays, cryptocurrency has become more popular, which will help people earn money by playing game. The system will fully support players who can earn as much as they can. But you will find out your only best way to earn.

The vision of Heroesoft is to build an NFT MMO RTS game with the best economy system that connected to traditional game players and the whole blockchain world. Moreover, that will be help more true gamers who would like to enter the crypto space by playing, crafting NFT and providing an underlying blockchain framework in the world.

The Land of Middle Earth

Heroesoftheland Coin Once upon a time, Middle Earth was formed before mankind. Middle Earth – The continent with a special charm by its vast steppes, has rich in resources and minerals. Every single space, every single river reflects its own peace and happiness.

Therefore, Middle Earth is being chosen for many species of creatures to live and develop, especially for nomadic people. They comfortably build their tents and herd livestock in the peaceful grasslands and lived day by day.

All of the founding members are not just businessmen and elite professionals but also hard-core gamers. They come from a long history of gaming and various NFT Games that they joined in. THIS IS IMPORTANT because the quality of the Gameplay depends not only on the skill of the developer but also on the shared passion and knowledge of each and everyone involved in the project.

Heroesoftheland brings players a real gameplay experience. A quality product was invested and developed for many years with long-term financial resources. Thereby the game is going to give all true gamers the experience on the Blockchain platform. Relive the memories of the legendary games in the past when real players together built an army, expanding the territory, protecting resources like Heroes of Might and Magic 3, Rise of Kingdoms…

NFT games have been so popular with the Trader community and investors, but still cannot get close to the big parts of the true gamer, because most of the NFT games’ gameplay currently on the market are quite boring and nonsense. Heroes of The Land’s mission is to deliver a quality game that is enough for the needs of the GameFi’s community. Moreover, it will become a connection between making games and NFT Game’s experience.