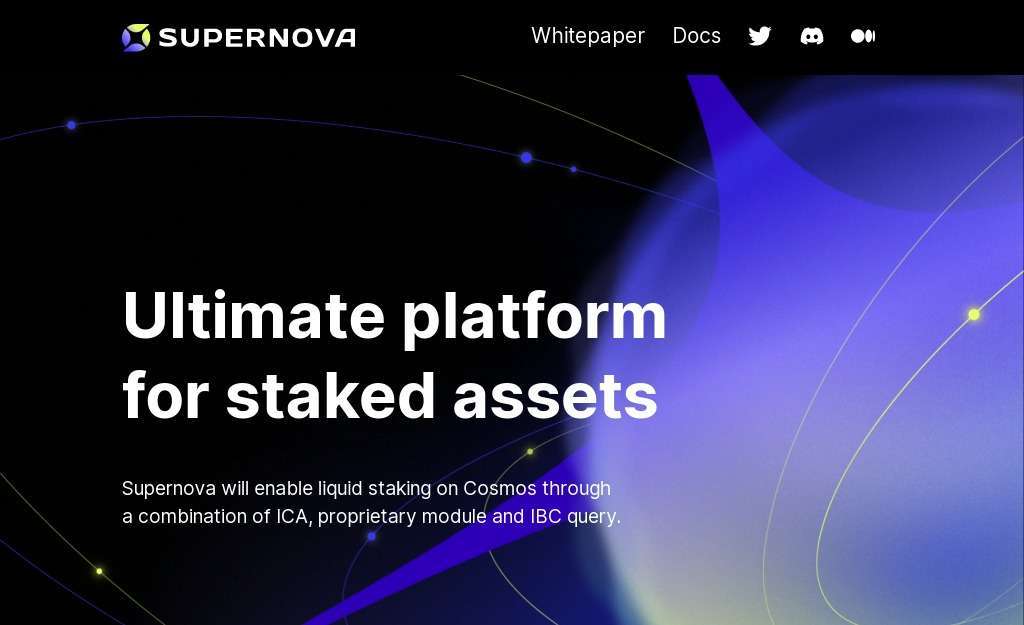 Supernova Airdrop is the ‘Ultimate Platform for Staked Assets’. Their goal is to provide all the necessary components for the staked assets, starting with liquid staking. Supernova goes beyond just providing shadow tokens.

Supernova shall enable auto-compounding and also let users to collateralize their shadow tokens to mint stablecoins in Gamma 2. They will also develop a swap called ‘Staked swap’ that is specifically designed for staked assets that will provide a fair swap experience.

Supernova has confirmed to launch an own token called NOVA. Early users who’ve done testnet actions and ATOM stakers may get an airdrop when they launch their token

ATOM – Cosmos is the Internet of Blockchains.

Supernova Airdrop Staking pool is the protocol that allows agents interested in transaction verification to open a pool and let other token holders delegate their shares to them. Staking pool blockchain is attractive because verifiers can get block rewards, and participants can receive incentives through delegation. However, it is also a problem because malicious agents can have a significant stake by operating a staking pool.

The liquid staking service can solve the above two problems. It tokenizes delegated shares and allows them to use them in DeFi. In addition, the service integrates and cost-effectively manages delegations. The liquid staking service is attractive because it allows users to earn profits from the delegation and benefit from using DeFi through shadow tokens. In addition, the service may provide auto-compounding of the interests so that the stakers don’t have to manually take care of the process.

Did you know Gamma Ray Burst? GRB is one of the most emphatic electromagnetic wave emissions in the cosmos. Most GRBs observed are thought to be released during the supernova implodes.

Supernova is a one-stop platform for staked assets, an app-chain based on Cosmos-sdk. The role of validators in the Cosmos app-chain is very important. They have to maintain reasonable uptime, propose new blocks, and participate in the governance. So, delegating tokens to the validator to onboard for the chain is essential for network security and decentralization also.

Therefore, the Supernova Foundation is announcing a validator delegation program so that native staking token, $NOVA, can be delegated to validators.

To earn rewards on the Supernova testnet, submit evidence of having completed the following tasks. The goal is to test the Supernova appchain and module logic.

In short, Gamma number is the version number of the Supernova mainnet, and implies major updates.

How To Buy Ripple With Perfect Money: Pros Or Cons Step By Step Guide

Aave Review 2023 : Lending and Borrowing Made Easy & Its Pros Or Cons

Flowbank Review : Is Good Forex Broker Or Not ? 2023 Pro Or Cons Latest Updated

How To Buy MATIC With Paypal : Pros Or Cons Step By Step Guide

Youhodler Review 2023 : Lending and Borrowing Made Easy & Its Pros Or Cons

Coinloan Review 2023 : Lending and Borrowing Made Easy & Its Pros Or Cons

Cityindex Review : Is Good Forex Broker Or Not ? 2023 Pro Or Cons Latest Updated

RoboForex Review : Is Good Forex Broker Or Not ? 2023 Pro Or Cons Latest Updated