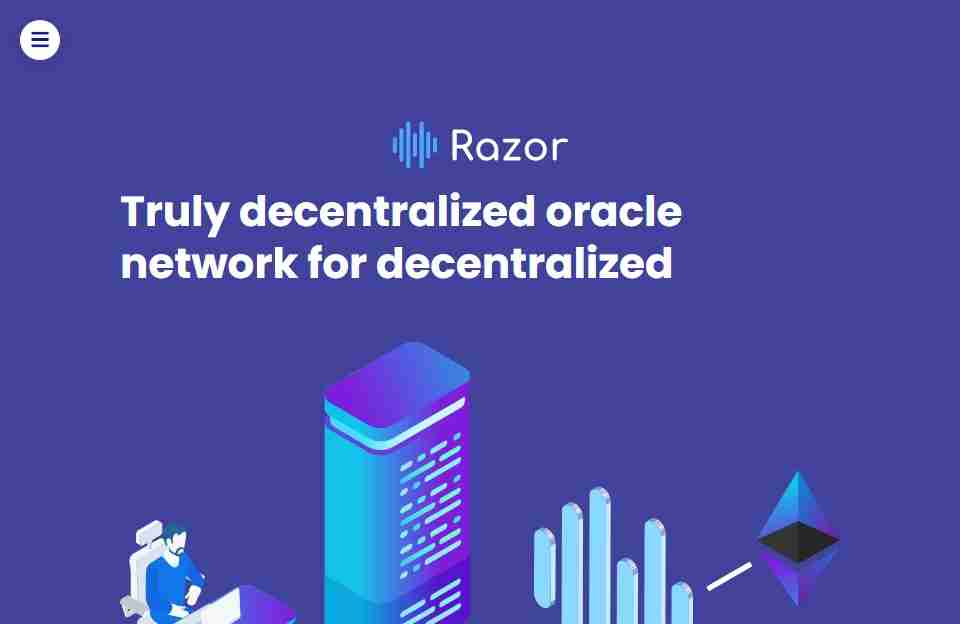 What Is Razor Network (RAZOR)?

Decentralized technologies such as blockchain are revolutionizing many industries including finance. Applications such as decentralized lending, stable currencies, prediction markets, and synthetic assets are being researched and built on top of them. Many such applications depend on real-world data, which is not readily available inside the blockchain environment due to their design. Razor Network Currently, this problem is being solved by something called an “Oracle”, which is an entity that reads real-world data and feeds it to the blockchain.

Current Oracle solutions are either centralized or vulnerable to certain attacks. Current oracle solutions may work short term but are not suitable for long term applications, which is essential in decentralized applications. In this paper, Razor Network propose a fully decentralized oracle network called with built-in governance, so that the network can thwart such attacks and remain functional in a constantly evolving environment. Razor is resilient to bribing attacks since it utilizes a high degree of redundancy and offers high economic security for all applications regardless of the fees being paid to the oracle.

Razor Network also can dispute the results of the oracle, which makes it resistant to many kinds of game theoretical vulnerabilities. Razor consists of stakers who accept queries from a job queue, perform fetching of information from the real-world, process and aggregate the results and serve them to the requesting application. Stakers are awarded for reporting coherently and penalized for reporting incoherently.

Razor Network uses a proof of stake consensus algorithm and uses a native utility token called RAZOR. RAZOR are needed to be locked to participate as a staker in the network. Stakers are awarded fees as well as block rewards for participating in the network. The amount of staked tokens of the staker determine their influence in the network.

The design goals of the Razor are to ensure the long term sustainability of the oracle and the data feeds it provides, a high degree of decentralization, high economic security in a way that protects both stakers and clients of the oracle from various attacks. Stakers are users who lock their funds in a smart contract. This action is known as “staking”. Stakers are expected to perform their duties honestly, or else they may lose their funds and future profits.

These applications consists of a set of smart contracts deployed on a blockchain platform. Such applications often require data from outside the confinements of the blockchains they reside in. Blockchains, being a deterministic system, only depend on the information available inside the system, as that is the only information that can be cryptographically verified by all participants anytime. Blockchains do not readily have access to the outside world, by design.

Developing a decentralized oracle is deemed a challenging problem. This is due to the possibility of multiple kinds of attacks such as collusion, takeover, Razor Network, bribing, etc., the requirement of subjective and objective decision making, determining the “truth”, and also due to the technological limitations of the underlying blockchain protocol.

Lack of high degree of decentralization and economic security

Some of the current solutions involve a trusted centralized mediatory, which acts as a single point of failure, while others combine results from a few stakeholders of the network. Often, if a high degree of decentralization is desired, the client has to pay a high amount of fees proportional to the degree of decentralization desired. This means that the accuracy and economic security of the oracle platform is not the same for all jobs, and the oracle cannot be trusted as the “Universal source of truth”.

Let’s explore this problem with an example. Assume there is a Razor Network backed stablecoin project called “Acme”. Acme platform issues US Dollar-pegged stablecoins backed by ether on the Ethereum blockchain, and hence, requires a data-feed of ether/USD. Acme depends on a decentralized oracle platform called “Truthbox”. Truthbox assigns stakers to the query and reports the ether/USD price, every time Acme requests the data with a fee. The number of stakers assigned by Truthbox depends on the amount of fees being paid by Acme.

This shows the weakness of the system. If someone requests to report the price to Acme with a very low fee, Truthbox will likely assign the task to a single staker (or very few stakers). Hence the system reduces to a centralized or semi-centralized oracle. The protocol, in such cases, becomes vulnerable to various attacks such as griefing, bribing and collusion.

If the oracle reports a price which is too far from the actual price, it can cause a large amount of liquidations and instability of the entire Acme platform. Hence it is required for Acme to pay a large amount of fees every time it requests a price from Razor Network, to make sure there is sufficient decentralization and economic security. But it still leaves it open to attacks where the attacker pays an insignificant amount of fees to report an inaccurate data point to Acme.

Libertyvps Web Hosting Review: Bitcoin as one of your many payment methods.