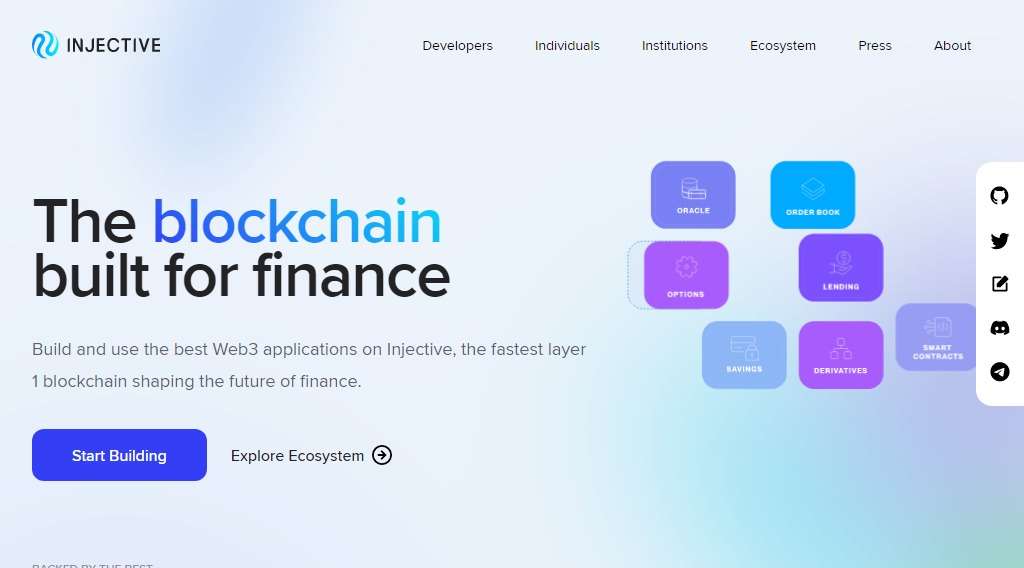 Injective mission is to create a truly free and inclusive financial system through decentralization. With the fastest blockchain built for finance, and plug-and-play Web3 modules, Injective’s ecosystem is reshaping a broken financial system with dApps that are highly interoperable, scalable and truly decentralized. Check This Coin Price Only on worldcoinstats.com

Securely transfer crypto assets and Web3 data from prominent blockchains to utilize on any application built on Injective. All dApps within Injective’s ecosystem can natively access sovereign layer one chains such as Ethereum, Cosmos and Solana, for frictionless interoperable communication.

Deploy applications with peace of mind as Injective is secured by globally distributed validator nodes with the largest institutions contributing to the proof-of-stake network. Injective employs a Tendermint PoS consensus to secure transactions with instant finality.

Injective is powered by a global network of developers, validators, builders, institutions and partners. Explore the fastest growing community pioneering a new world of finance.

Who Are the Founders of Injective Labs?

Injectvie Labs is the research and development company that first began contributing to Injective Protocol.

Eric Chen is the co-founder of Injective Labs. Prior to founding Injective, he worked as a cryptographic researcher and trader at a major crypto fund where he led innovative market neutral trading efforts in the blockchain space as well as investments into prominent companies such as 0x, ChainLink, and Cosmos. Chen has extensive knowledge about blockchain protocols and traditional finance along with a native understanding of both eastern and western blockchain-based protocols and communities.

Albert Chon is the CTO of Injective Labs. He graduated with a Bachelor’s and Master’s degree in computer science from Stanford University and was a software development engineer at Amazon. He is well known for pioneering a new Ethereum standard that is used by a number of major projects today and co-founded Injective Labs with Eric Chen.

Injective provides the most advanced, next-generation financial infrastructure for building DeFi applications on top of the Injective blockchain. Users can access these applications in a fully decentralized, fast, cross-chain, low-fee, and secure manner.

Some of Injective’s key elements include: *Layer-1 smart contract blockchain: Injective provides a start of the art interchain L1 that is able to achieve ultra fast speeds while charging zero gas fees. *Unlimited DeFi applications: Injective allows anyone to build DeFi applications with Injective’s robust infrastructure and financial primitives such as an on-chain orderbook. *Cross-chain trading and yield generation:

Injective is capable of supporting a diverse array of trading and yield generation activities across distinct layer-1 blockchain networks such as Cosmos and Ethereum.

*Community driven network governance: Injective is governed by its decentralized community in which all new innovations are voted on by a Decentralized Autonomous Organization (DAO) structure. *Pioneering interoperability

: Injective is the most interoperable blockchain with native connections to Etheruem, Cosmos, Solana and much more.

*Fully Customizable: Ship your products with the ability to swiftly modify any parameter to fit your use case.

How Is the Injective Protocol Network Secured?

The Injective Protocol blockchain operates on a Tendermint-based proof-of-stake (PoS) consensus mechanism. Prominent validators help to secure the network while making it more decentralized as well.

Where Can You Buy Injective Protocol (INJ)?

Injective Protocol (INJ) tokens are available on most major exchanges. Binance has the highest INJ/USD trading volume at $12,687,084. This is the most popular exchange for purchasing INJ.

Other good options include Bilaxy, Huobi Global and Uniswap. It is important to note that buying cryptocurrency comes with risk, just like traditional investing.

Where I Can Find Injective Coin Whitepaper ?

You Can Find Injective (INJ) Whitpaper By Clicking Here

Where I Can Buy/Sell Injective

You Can Buy Or Sell Injective On Some Popular Exchange For Example – Binance , Coinbase , Huobi Etc .

What Is Max Supply Of Injective?