Age Of Tanks Airdrop Review: Selected to Win 100 USDT each 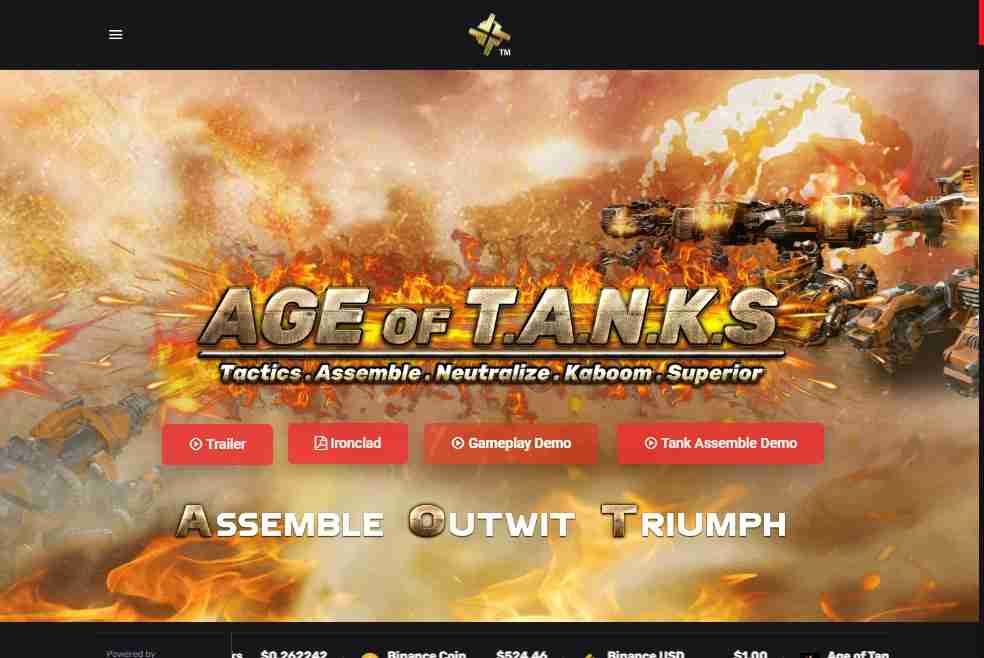 About Age Of Tanks

Age of Tanks is a 3D turn-based strategy game, where gamers build and command their fleet of tanks to storm the battlefields in their quest to conquer Earth Zero. The game starts with a free basic tank for players to scavenge for Brodiums, the precious element fused from the 2nd Impact, a crucial raw material for building the supreme tanks.

Age Of Tanks Airdrop is giving away a total of 1,000 USDT to 10 lucky participants. Sign up for the giveaway and complete simple social tasks to earn entries. A total of 10 participants will be randomly selected to win 100 USDT each.

AGE OF TANKS is a 3D turn-based strategy card game, set in an immersive metaverse, where players can assemble their preferred tanks, build their tank teams, outwit opponents, and rule the battlefield. Inspired by successful games, such as Hearthstone and Axie infinity

The game combines the best of two worlds – a fun and exciting CCG PVE experience, a PVP competitive and social gameplay modes and activities as well as a decentralized item ecosystem through game items as NFTs and world-building powered with DeFi elements.

We believe that games are an integral part of human life, with the possibility of nurturing and discovering hidden abilities of individuals, communities, and society that are otherwise limited or impossible to achieve in real life. We aspire to create a gaming environment that has a positive and lasting influence on people’s lives, in cultivating leadership, teamwork, and creative minds.

Age of Tanks’ mission is to build a game that is designed to attract both worlds, the blockchain-powered decentralized ecosystem empowering gamers with economic opportunities where their actions determine the development of the game, as well as the pure gaming and competitive aspect of finding the best strategies and synthesizing the best teams in building their legacies.

Age of Tanks has a dynamic campaign progression and leveling system that rewards players as they progress through the game. Players can keep earning more XP to increase their CHAMPION Level in advancing through the different stages of the campaign.

CHAMPIONS are masters at scavenging. Frequently modifying old tech with new to construct weapons or armor. Once these plans and parts were ready, they would be brought to the Iron Forge for further development and assembly. CHAMPIONS who have gathered enough parts to form fleets of tanks would hone their skills against other Champions in the arena.

Gamers can choose to sell parts they have obtained or assemble 4 separate parts into a super tank for conquest and conquer. There are different skills available for every part, with some having special bonus attributes to unleash on the battlefield, thus allowing for infinite strategic possibilities. Tanks, after being assembled, will be minted to actual NFTs and can be traded in the NFT marketplace.

One of the core features of the game is the PVP arenas where gamers can battle to scale the ranks and win Brodiums and $A.O.T tokens.The higher a gamer ranks, the better the rewards. Top gamers will also be rewarded at the end of each season with $A.O.T tokens, which act as an incentive for the more professional scene.

King of the CHAMPION

Age of Tanks will be hosting monthly competitions, whereby top-ranking players stand to win attractive prizes such as $A.O.T, limited edition parts/tanks, and so on.

As they grew in power, CHAMPIONS get restless. Often looking beyond their borders to acquire land to establish their own base. Idealism or greed, it was time to unify Earth Zero.The metaverse of Earth Zero is one of the biggest elements that will add a vast range of interaction opportunities between gamers to fulfill the social aspect that extends far beyond the game.

BingX Crypto Exchange Review: It Is Good Or Bad?

Thundercore Ico Review: It Is Legit Or Scam?