Waves.tech is an all-encompassing ecosystem of innovative technologies advancing technological frontiers for the pioneering developers of tomorrow and adopting them for every-day practical implementation. Leveraging the three practical and powerful blockchain protocols provides both developer-friendly infrastructure as an experimental ground for innovation and ready-to use tools and products demanded here and now.

Waves.techis a multi-purpose blockchain platform which supports various use cases including decentralized applications (DApps) and smart contracts. Launched in June 2016 following one of the cryptocurrency industry’s earliest initial coin offerings (ICO)initially set out to improve on the first blockchain platforms by increasing speed, utility and user-friendliness. The platform has undergone various changes and added new spin-off features to build on its original design native token is an uncapped supply token used for standard payments such as block rewards

Waves.tech Gravity is a decentralized cross-chain and oracle network based on a truly blockchain-agnostic protocol for communication between blockchains and with the outside world, working with native token economies. Gravity provides multi-purpose cross-chain interaction, but without introducing a new Gravity token. The truly blockchain agnostic no-token approach creates a more inclusive, open ecosystem, while addressing future scaling/stability issues. Gravity empowers all elements of ecosystem but, more importantly, it acts as a two-way portal between and the entire open finance ecosystem.

Waves.tech provides multi-purpose cross-chain interaction, but without introducing a new Gravity token. It utilizes different chains without a need for a proprietary token and leverages economies of connected chains.

Waves.tech DApps for storing and managing your crypto assets. Independent products built on  and driven by the community

Waves.tech Node operators own and maintain Gravity nodes and monetize their infrastructure by providing data, earning tokens of the blockchains that are integrated with Gravity. Data providers can monetize their services of transferring data from the Internet to a blockchain. Cross-chain transfer providers, in addition to data, can provide liquidity for assets to execute cross-chain swaps.

Waves.tech Public and private blockchain networks can benefit from the presence of an oracle network that uses their tokens as payment on their own blockchain network. This opens up a possibility for issuing popular tokens of other target chains integrated with Gravity.

To empower builders of decentralized solutions of tomorrow, embraces various tools, dev libraries, guides, tutorials and courses within a single space. Overarching theoretical basics and practical frameworks were enshrined in . Campus to make the first steps in adopting a decentralized web as fast and easy as possible. campus is a direct gateway to start developing and utilizing decentralized technologies. It’s a portal, a guide and enabler.

Basically, a smart account is an account with an attached script, so that the account can validate every transaction before confirming it. An account can restrict any outgoing transaction based on: signatures and other supplied data, proofs, current blockchain height and arbitrary blockchain data, like data from oracles sent as data transactions.

Smart assets are unique virtual currency tokens that may represent a tangible real-world asset, or a non-tangible ownership that can be purchased, sold, or exchanged as defined by the rules of a script on the blockchain network. In simple words, smart assets are assets with an attached script which validates every transaction with the asset.

Node API allows applications to interact with the blockchain node to send transactions or fetch data by making HTTP requests. Nodes have an out-of-the-box REST API, while GRPC protocol is available as an optional extension.

Waves.tech Explorer is an online service that displays Main net, Test net and Stage net blockchain data in a human-readable form. Configurable for users’ custom network, Explorer provides tracking of any network or blockchain node and delivers APIs that enable the display of token distribution by addresses and history of balance changes. 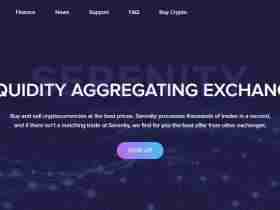 Serenity Crypto Exchange Review: It Is Good Or Bad?

What Is Aeternity (AE)? Complete Guide Review About Aeternity.

What Is Ravencoin? (RVN) Complete Guide & Review About Ravencoin