Tranquil Finance is an algorithmic money market protocol on the Harmony ONE block chain. It allows users to supply and borrow assets, while receiving or paying interest in a completely permission less and decentralized way. Borrowing and lending interest is set based on market demand, and loans are over-collateralized to ensure solvency.

Tranquil Finance This model was pioneered by the Compound protocol on Ethereum, but high gas fees have made the protocol untenable for most users. Building on Harmony ONE gives the Tranquil protocol fast and cheap transactions, democratizing access to everyone.

Tranquil Finance is similar to protocols, such Compound, AAVE, Venus or Benqi that exist on other block chains. Harmony currently lacks such a money market protocol, which is a critical component of DeFi ecosystem on every block chain.

Although the journey has just started, they hope to build the best money market primitive on Harmony ONE, and help grow alongside the Harmony ecosystem. Tranquil Finance’s core Comptroller and market contracts have been audited by CertiK.

Tranquil Finance vision for Tranquil Finance is to be the premier platform on Harmony for lending and borrowing. Even if larger multi-chain protocols come to Harmony, will still have a unique edge by being tailored to the specific needs of the Harmony ecosystem. In addition to the standard safe assets like BTC or USDT, will work with the community to list long-tail tokens that are unique to Harmony, increasing the utility and value of all tokens in the ecosystem.

Tranquil Finance In the medium term after launch, want to build a staking derivative token (stone). It would allow stokers to receive ONE staking rewards while also using it as collateral on Tranquil, unlocking tremendous untapped value for the entire ecosystem. Holders of stone can use it in other DeFi protocols or exchange it back to ONE without the lengthy delegation time.

Tranquil Finance In the very long run, have a vision of allowing users to do much more with their collateral on the protocol. want to empower under collateralized use cases, like leveraged trading, options, and perpetual swaps. All features on the platform would share a unified collateral model and borrow from the same asset markets .Basically envision end goal as a decentralized FTX, which believe is possible thanks to the speed and low cost of the Harmony block chain.

Anyone who has been in this space long enough has undoubtedly been disappointed by projects with lofty roadmaps that are not followed. They do not like to overpromise and under deliver. The outline specific near term goals as well as more broad medium and longer term ones, knowing that priorities inevitably change with such an earlier project, especially in a space as fast moving as DeFi.

Tranquil Finance will not commit to a hard emission curve but instead the philosophy is to carefully balance the expansion of the token supply with the incentive rewards for attracting liquidity and users. The xTRANQ public sale is an example of this philosophy in action. Based on the experiences of incentive programs from other protocols, rewards are often farmed and dumped by huge funds who often have no interest in the long term interest of the project itself. They expect the allocation for incentive rewards to last at least 4 years.

The Tranquil protocol smart contracts are forked from Compound protocol, which is a deeply battle-tested protocol with minimal changes. Furthermore, they have been successfully audited by CertiK.

What Utility Does TRANQ have?

Tranquil Finance 75% of all protocol fees are distributed to TRANQ holders through locked staking. Besides that, TRANQ is Tranquil Finance’s governance token, so it will become a voting tool once the protocol is at a more advanced stage.

What are the risks of Borrowing?

If your total borrowed amount equals to or exceeds your maximum borrow limit, your collateral will get liquidated. There are three main scenarios where this can happen:

What is Landshare? (LAND) Complete Guide Review About Landshare.

What Is Maison? (MSN) Complete Guide Review About Maison. 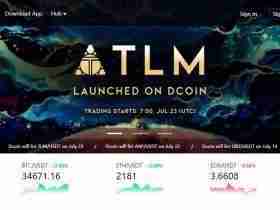 Dcoin.com Crypto Exchange Review: It Is Good Or Bad?