What Is StaFi (FIS)?

StaFi protocol is the first decentralized protocol unlocking liquidity of Staked asset. This aims to solve the contradiction between Mainnet security and token liquidity in PoS consensus. The token holders are staking through staking contracts built in protocol, and then get alternative tokens(rToken ,such as rDOT, rATOM, rBNB, rSOL etc.), rTokens are tradable and it can get staking rewards from original chain at the same time.

StaFi is a combined abbreviation of Staking+Finance. It is a decentralized protocol built with the Substrate. The contract layer is composed of multiple staking contracts, and the application layer is mainly trading platform of rTokens. PoS (Proof of Stake) world adopted Stake model as a safety feature, weighing its players by, not computing power as its PoW (Proof of Work) counterpart, but how many tokens they are staking—solving extravagant computing power arms race for the right to produce.

On the strength of that, it was making its debut while claiming its superiority over PoW. Any PoS system is underpinned by the stakability of its token, as an approach to keep it democratic enough. It is, in a way, solving the centralization problem of computing power in PoW.

PoS was debuted in 2011 by Quantum Mechanic on Bitcointalk Forum. The system creatively replaces computing power weight by token weight in Block Producer elections. Token holders can claim its run for BPs to the system by staking their tokens, while the system selects BPs through random algorithm. Those selected will be responsible for packing, verifying of transactions and prolonging the chain. As a late-comer to the game, PoS drew on the experience of PoW with regards to consensus, elections, packing, validation and so forth.

As technology advances, PoS is steering the development of blockchain world in performance, capacity and sustainability. 2019 and the following year will be seeing, with excitement, the landing of second-generation PoS 1 consensus as projects like StaFi, Tezos, Cosmos, and Polkadot will soon launch the mainnet, making them the touchstone of PoS consensus in the new era.

A centralized token circulation model is often endorsed by a third party, which obtains the ownership of tokens by collecting them from holders, then conduct Stake in an intensive way. Tokens that are staked will be used to produce blocks through a node, thus being rewarded. When the third party reaps enough tokens, it will be well-positioned to issue alternative tokens to its customers. StaFi Then, it can also launch a trading pair with that issued token on one end, in collaboration with a centralized exchange; or even create a trading pair at any decentralized exchange.

Holders of that token can trade the ownership (also redemption right and income right) of the original token, without redeeming tokens on the primary chain. In this way, the liquidity of Stake tokens are, to some extent, boosted. There are side effects, though. This model is hardly possible without the trust of token holders in the endorsement of a third party and in the authenticity of its redemption and income right.

StaFi is a decentralized protocol that empowers liquidity. It encompasses 3 layers—bottom, contract and application layers. The bottom layer is mainly based on a blockchain system established by Substrate (which is a blockchain architecture developed by Parity, and the whole architecture integrates many development modules, including consensus module, P2P module, Staking module, etc.). The contract layer support creating a variety of Staking contracts, such as Staking contracts for XTZ, Atom and Dot respectively.

The token holder can Stake through Staking Contract, which is consistent with the inflation incentives obtained by the ordinary Stake. But the difference is that The holder also can obtain rTokens. Last, the application layer supports third-party StaFi-based APIs or customized APIs to create a decentralized bondeds asset trading market for rTokens to circulate, transfer, and trade on the protocol.

The contract that creates the interaction with the Stake original chain at the StaFi contract level is called Staking Contract (referred to as SC). For example, to create a XTZ-SC for connecting Tezos with Stafi. When user A holding XTZ initiates a Stake operation on XTZ-SC, the Staking Contract will first create a multi-signature address, and he will transfer XTZ through the Tezos original chain to that address.

When the transfer succeeds, the contract will execute the Staking operation of the multi-sign address. If succeed, the tokens will be locked to the original chain. Then, the StaFi protocol will receive a proof of the Tezos original chain (Proofs), and then trigger the contract to generate rXTZs of equal quantities to XTZ and send them to the staker. 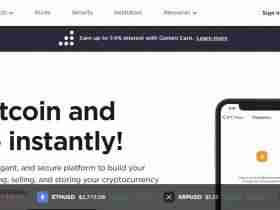 Gemini.com Crypto Exchange Review: It Is Good Or Bad ?