The Rhovit Token is used by RHOVIT providers and advertisers to incentivize users to watch and share their content. Rbits also provide the backbone for RHOVIT’S circular economy by “valuing” users transactions on the site and using those transactions to mine Rbits. The mined Rbits are then distributed out to the content provider community and used as backing to distribute RHOVIT’S in-house currency, “Coins” to the user community so they can purchase more content.

The Game Change Team Behind Rhovit

The problem with content monetization is not singular. High platform fees, transaction fees, middlemen, skipped ads, ad blockers, low cpms, piracy, audience reach, expectations of free…it is all of these. Blockchain and the creation of a token by themselves are not a cure all. But when used as the backbone and fuel of a fully realized circular system that feeds and regenerates itself, they are the technology that will disrupt an entire industry.

Rhovit was created in 2012 by filmmakers who wanted to fix the system. Not just for film, but music, books, games…for all creators. The idea was to give artists all the power of a major platform but the freedom and profit of their own site. It was a better system but it wasn’t complete. In 2014 we sidelined the project. So why are we bringing it back now? Because of technology like Ethereum and the ability to complete what we started.

Rhovit has used them by creating a value layer where there was none. Imagine if all the actions a User took on a platform…renting a movie, reading a book, watching an ad…were drops of water. Now imagine all those drops collected in a trough. Right now on platforms that water sits until it evaporates into nothing.

RHOVIT dumps it over a water wheel, powering an engine that creates value for Users and Providers in the form of Rbit Tokens. It is the creation of value from waste that is the key to solving the writers problem and the problems faced by millions of other content creators big and small. RHOVIT is an earn and spend circular economy that creates and spreads value to it’s entire community.

Trade, in turn, is Rhovit second oldest and most important pivot. From long-distance trading, economies were established, which allowed modern civilizations to thrive. The oldest coin-based currency can be thought of as a proxy for trading values greater than two hands can carry, or for trading commodities that aren’t physically available nearby, and so currency itself necessitates logistics. Together, trade and logistics form the backbone of human achievement.

Consider the magnitude of the logistics industry. Looking back through history, the wheel is essentially the cornerstone of modern civilization. It brought Rhovit transportation, and transportation afforded the systematic transfer of goods. From farm to market, and from market to table, the movement of products in bulk has been the single most important adaptation of the last 10,000 years.

Despite the revolution brought on by the advent of the cart, the ship, the engine, and the airplane, the shipping industry as a whole has been one of the slowest markets to adapt and evolve over the past century. Rhovit Information Age has disrupted nearly every major workforce on the planet.

Globalization has opened new trade routes, technology has changed the way shop and spend, and so naturally, the demand for shipping has reached an all-time high. It’s no wonder that most shipping customers are shocked and dismayed to find their brokers still relying on artifacts like paper records, written manifests, and spoken words to get cargo from point to point. It’s time for a breakthrough in how handle freight.

Blockchain technology is often characterized as “disruptive” because it can revolutionize the way Rhovit interact as a society. Distributed ledgers are disruptive for ancient business models in the same way email disrupted the mailbox. Applied correctly, a blockchain will facilitate the digitization of record keeping processes related to the trade of assets, even in scenarios when intermediaries and brokers are incentivized to resist revolution. The blockchain can improve the transportation of commodities in every country, across the entire globe, and beyond. We’re launching Rhovit to make that leap possible.

The mined Rbits are then distributed out to the content provider community and used as backing to distribute RHOVIT’S in-house currency, “Coins” to the user community so they can purchase more content.
Visit Website
Tags: Rhovit Rhovit Ico Rhovit Review

What Is Yop? (IDNA) Complete Guide Review About Yop. 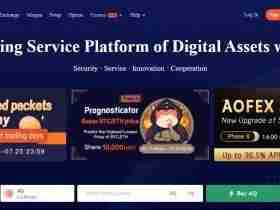 Aofex.com Crypto Exchange Review: It Is Good Or Bad?