Rabet (RBT) is an integrated set of open-source wallets for the Stellar network, allowing everyone around the world to interact with Stellar Developers can directly inject Rabet into their application through the browser without the need to install an SDK or package. This is the start of safe interaction with your users.

Rabet (RBT) Today have made a major decision to create a large ecosystem on Stellar’s client layer. They believe that, in addition to the DAO-managed core of Stellar, a community-governed ecosystem must be present on the client-side. To this end and to create a powerful ecosystem, have decided to mint Rabet token (RBT) to turn community members into stakeholders in the value that Rabet creates.

Rabet Users can easily do all operations available on Stellar, including asset transfer or asset exchange, and interact with all the Stellar apps in a safe user-friendly environment. Rabet is your key to entering the world of Stellar.

Rabet’s goals are tied to Stellar’s goals. This means that Rabet helps Stellar to become a global payment network.To become a robust financial network globally, a cascade of events need to take place:

Rabet’s mission is to facilitate interaction. This has been our objective from the first day started developing Rabet in 2020. Rabet’s structure is built entirely around this goal. This interaction consists of two parts:

Establishing a layer between the network and users. The layer is made of a set of various clients on different platforms. The advantage distinguishing Rabet from other clients is its pleasant user experience and clean design implemented through a single design system.

Rabet is designed with accessibility in mind, allowing users to execute Stellar’s major operations in a user-friendly environment.

All the data in the Rabet is encrypted and stored on your local device. Therefore, you are in complete control of your data.

Rabet Anything you have yet gained was derived from the interaction. The structure of Rabet is designed such that one can interact with the next generation financial network, i.e., Stellar.

Rabet is available to everyone on any operating system and device—browsers, smartphones, desktops. Just choose your device and install it.

Rabet is Your Identity

Rabet In the Stellar world, Rabet is your passport, letting you interact with any SApp you wish.

PR: The will collaborate with reputable crypto outlets to promote Rabet and Stellar through educational content and news stories.

Activating and retaining users requires a well-defined process consisting of the value and experience the user gains by interacting with the product and brand. 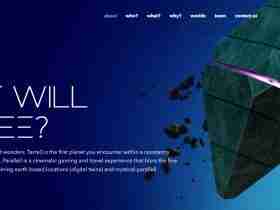 Parallell Airdrop Review: You Will Get Points