The Pofi is the main platform where people can trade Dino & Egg tokens and all Dino related NFT’s. Initially forked from a Serum Dex UI, it will evolve throughout the different stages to become a market aggregator for any Dino-related asset. Serum is a protocol and ecosystem that brings unprecedented speed and low transaction costs to decentralized finance. The Dino Dex composes with Serum’s on-chain central limit orderbook to share liquidity and power markets-based features for users.

The release of the Love Shack marks the birth of the Dino Egg token. A mysterious token that plays an essential role in the minting process of uniquely generated Dino NFT. The Love Shack is a web application that interacts with a staking contract where users can earn $DINOEGG tokens by staking their $DINO tokens. There is no minimum or maximum amount users can stake.

The amount only affects the rate at how fast Pofi tokens are generated. Initially this contract allows $DINO tokens to be staked to earn $DINOEGG at a rate of 1 $DINOEGG per 100k $DINO staked over 30 days. However, this rate will be cut by a third every 65 days starting on the 28th of September. This rate rewards early stakers with more $DINOEGG tokens, yet continues to provide an endless stream.

After earning $DINOEGG tokens users can exchange them for a Dino Egg NFT. The Love Shack provides a mechanism that can turn 1.00 $DINOEGG token into a Dino Egg NFT. Users can also choose to submit multiple Pofi tokens for a chance to get a Dino Egg NFT of a higher rarity. These Egg NFT’s are not true NFT’s, but rather non-divisible tokens of a certain rarity type. There will be levels of egg rarity that are given based on a combination of randomness.

This Randomness can be achieved by using a VRF (Verifiable Random Function). ‘A VRF is a pseudo random function that provides proof that its outputs were calculated correctly.’ This is necessary to stay resistant from randomness exploits. This aim to collaborate with Chain link or Switchboard to use their trusted VRF. A solution specifically developed for smart contracts.

The Incubator is the final step for users to get their hands on a Dino NFT. Dino Egg NFTs can in fact be hatched into a generative Dino NFT. This has a similar dynamic to turning a $DINOEGG token into Dino Egg NFT – with the rarity of the egg combined with a stroke of luck. Each Dino NFT has a unique set of traits and features.

The different traits that a Dino NFT has will be based around their elemental properties. For the Dino itself the skin, background, body features and wear ables are the main dynamic properties. More information on the different rarity types will follow.

Equip your unique Dino NFT with your favorite NFT equipment and join a Dino themed online platform. Show off your wares and participate in tournaments in a competitive online environment. More details on the Dino Entertainment System will be released in the future. The Dino NFT hatched from a Pofi is not their final form. NFT equipment specifically and custom made for Dino’s helps bring more customization.

This part is essential for a fun and constantly refreshing experience. NFT equipment also makes it possible to boost stats, giving the Dino entertainment system an extra interesting feature. Unlike the Dino NFT, NFT equipment will be
earned through community raffles or tournament rewards.

Solana is a web-scale blockchain that provides fast, secure, scalable, decentralized apps and marketplaces. (Genesis Block, sd) One of Solana’s core innovations which makes it very promising is the use of ‘Proof-of-History’. ‘Proof-of-History’ provides a way to cryptographically verify passage of time between two events, essentially creating a way to encode data as time.

Pofi In practice, this allows the network to process many transactions every second since transactions don’t have to wait till a ‘block’ is filled. In addition, Solana also uses ‘Turbine’ protocol. ‘Turbine’ breaks data in smaller packets making it easier to transmit data between nodes.

What Is Five7 (F7)? Complete Guide Review About Five7. 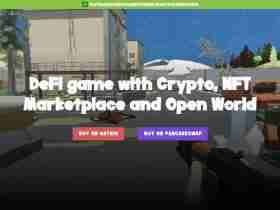