What Is Newton (NEW)?

From the launch day 2019/3/15 to 2021/1/31, a total of 1545232707.3505096555 NEW, implemented in accordance with the original consensus mechanism and release plan, namely NewPay NewForce mining, including NewID creation invitation , NewMall shopping, and NewPay node pledge mining . The day’s personal NewForce divided by the total system’s NewForce, multiplied by the NEW released on the day is the NEW available for the individual’s contribution that day.​

Users Own Their Own Data

Users secure and control their personal data through cryptography, and manage their personal credit and share profits produced by their data in a pre-agreed manner. Newton Project aims to build infrastructure for community-based economy, and through the provision of services around governance, collaboration and incentives, upgrades corporate economy to a brand new community-based economy that benefits everyone who contributes.

The team is distributed all over the world and is made up of technical experts from different countries, e-commerce entrepreneurs and other industry elites. In addition to the retail industry, Newton is also committed to foster real applications in agriculture, supply chain, self-finance, payment, public welfare, games and other fields.

Replacing middlemen with technology reduces transaction costs and rewards any one who contributes to the transaction, whether they’re service providers, consumers or others connected by the value-based internet. Besides, Newton currently has a global and diverse community distributed over 89 countries. This has established 32 overseas telegraph groups covering more than 170,000 people. Community is the foundation for the Newton community-based economy.

The community economy managed by non-profit foundations will replace the monopolies of middlemen managed by traditional for-profit organizations. Based on open, fair, and rational rules, every contributor will benefit from, and become part of this economy. The Project has created the world’s first smart community system which involves both the humans and machines.

Together, this helps establish new economic models via smart collaborations and stabilizes the community economy. Comparing to traditional business model, It has obvious advantages in terms of Organizational structure, Cooperation mode, Incentive mechanisms, The ownership of the data, and Transactional costs.

NewChain’s main chain can process over 5,000 transactions continuously each second, and supports the operational requirements of e-commerce, the Internet of Things, and other high-frequency trading scenarios. Newton is the infrastructure of the community economy and its technical framework includes the Application layer, the Protocol layer and the Basic foundation technology layer, providing the back bone for complete governance, collaboration, incentives to stabilize the community economy.

Newton full process stack offers technology solutions from the atomic world to the real world, from hardware design to application layer software development through basic technology and our hyper exchange protocol. Using New Studio as your core development toolchain, anyone can develop distributed apps without programming experience. This has a full stack technology architecture to support current Dapps such as NewPay and NewMall. 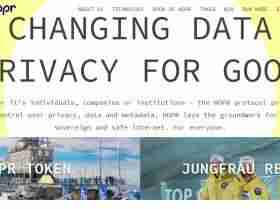 Hoprnet.org Airdrop Review: HOPR-PC will be able to claim 500 HOPR