Ink Protocol vision is to create a safe, easy, and rewarding way for people to get rid of the unused stuff lying around their homes. Today, the community consists of 10 million registered users who have exchanged 100 million items through the Ink Protocol mobile apps and website. Listia has raised over $11MM in capital from prominent Silicon Valley venture capital firms and investors, including General Catalyst, A16Z, Y Combinator, SV Angel, Founder Collective, Max Levchin, Naval Ravikant, and others.

Credits can also be earned through various activities, such as interacting with listings or other users, inviting friends, completing special offers and goals, or they can be purchased directly from Listia. Ink Protocol is unique because its users buy and sell goods exclusively using a centralized virtual currency the company created called “Listia Credits,” which have been in circulation since launch. Users earn Credits by selling things in the marketplace and then spend those Credits to buy other things in the marketplace.

Unlike other recently launched cryptocurrencies, Ink Protocol has a large community of users who have already generated millions of dollars in revenue using the Listia Credits virtual currency. Ink has been fully integrated into the Listia marketplace and replaced Listia Credits, resulting in widespread adoption and immediate usage of Ink at launch.

With the current install base, that means millions of real user wallets went live and there is enough transaction liquidity to start using Ink as intended today. At launch, the Listia marketplace was able to jumpstart Ink via millions of buyers with XNK balances, sellers with feedback and reputation, and also kick off the network effects in a way that makes the platform fully functional on day one.

Ink Protocol is a decentralized reputation and payment system powered by the Ethereum blockchain and a native ERC20 utility token: XNK. It is designed specifically for P2P marketplace transactions where trust between the buyer and seller may be limited. Ink enhances the buying/selling process by helping users safely send and receive payments in P2P marketplaces while also earning a publicly viewable reputation. Payments within Ink are sent using XNK.

Ink Protocol negatively supports decentralized escrow to create a safe way for buyers and sellers to transact. When a buyer pays, the XNK are held by the contract until the buyer indicates that the items have been received. At that point, the tokens are released to the seller and the transaction is finalized. This also serves as a staking function within the protocol. The seller must stake their reputation against the tokens until the buyer receives their item.

However, sometimes the transaction in a P2P marketplace does not go as planned. For example, the item may arrive damaged, the seller may lie about shipping an item, or the item may not be as described. In this case, most centralized marketplaces will help resolve your dispute by having a customer support team member assess the evidence and decide whether a refund is necessary.

Ink Protocol distills a typical marketplace transaction into a series of states, which are defined below. This flow was developed based on the team’s many years of experience running Listia and dealing with myriad of outcomes and edge cases that can occur during a marketplace transaction. A full diagram of a transaction’s various states is included below as well. At first, it may seem strange that the buyer is initiating the transaction, but this structure prevents an extra call to the Ethereum blockchain.

Reputation is decentralized, independent, and public, so it is available anywhere. Bring it with you and never worry about rebuilding it from scratch. Ink Protocol can be integrated into new or existing marketplaces and can also be used in marketplaces that don’t directly handle payments.
Visit Website
Tags: Ink Protocol Ink Protocol Ico Ink Protocol Review

What Is Rewards? (RWD) Complete Guide Review About Rewards. 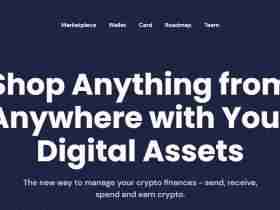