GEEQ is based on a new blockchain consensus protocol called Proof of Honesty. PoH empowers users who hold tokens on the platform to determine for themselves whether the network of validating nodes is behaving honestly. This allows to provide 99% Byzantine Fault Tolerance (BFT) while delivering rapid transaction finality at extremely low transactions cost. An additional protocol based on economic mechanism design gives Strategically Provable Security (SPS). A multi-chain architecture creates an ecosystem of interoperable instances that can safely share $GEEQs and native application tokens while supporting almost any type of internal business logic.

This makes GEEQ suitable for a wide variety of use cases, allows for upgrades and bug fixes without breaking protocol or instituting hard forks, and offers a flexible and more secure platform for startups and DApp developers who wish to take full advantage of blockchain’s potential. The $GEEQ itself is a stabilized-token supported by an innovative algorithmic monetary policy designed to reduce price volatility and make $GEEQ a less risky store of value and a more attractive medium of exchange.

When there is a central party that can and should be trusted with data, there is no real need for blockchain. Employers keep personnel records in private databases, and manufacturers keep records of inventory, sales, parts, accounts payable, etc. in the same way. This is just as it should be. Similarly, if several parties trust each other, a consortium of banks or hospitals, for example, then synchronized data systems do an excellent job.

GEEQ The problem requires secure transfer of value, possibly in very small increments; for example, micro payments for content or web services and machine to machine markets, and person to person payments such as small charitable contributions or sharing the cost of a meal among a group of friends.

GEEQ provides an answer to all of these problems. Let’s begin by describing what Geeq is. An instance of a chain is any blockchain that uses validation protocols and architecture (described below). The set of all instances collectively form an ecosystem of separate but interoperable blockchains that make up the Platform. Each chain extends from its own genesis block created by which guarantees the integrity of security of the instance.

It might seem that this approach gives a great deal of power. However, once a genesis block is created, neither nor anyone else can alter it or the operation of the chain instance that uses it as a foundation. There is simply no mechanism to allow such manipulations to happen. Once launched, each chain has a life of its own.

All instances of GEEQ begin with a genesis block (block number 0). Blocks of validated transactions are created by nodes in the network and appended sequentially. Genesis blocks are created by at the request of developers who wish to build applications and include all the code that will run the validation and application layers. This tight control over the form of genesis blocks has several motivations. Most importantly, it fixes the rules under which the chain will operate. Including copies of validation and DApp code that nodes are expected to use in the genesis block allows users to do their own audits to verify that the rules are being followed and nodes are behaving honestly.

Bugs, hacks, upgrades, new functionalities, quantum computing, etc. all make it desirable to be able to let blockchains and DApps evolve and change over time. When hard forks6 are imposed on unwilling or unwitting users by foundations, developers, coalitions of nodes, or even through complicated governance systems, faith is broken with users and confidence in the platform is undermined. GEEQ multi-chain architecture provides an elegant solution to this problem without breaking our core principle that code is law.

If an instance of a GEEQ chain is found to have bugs, has become obsolete, is not taking advantage of new technologies, or is failing to meet current user demands, a new instance can be created with the intention that it replace the existing one. The new chain would have a new genesis block with a new set of validators, validation and application code, but no tokens. Users and validators on the old chain are allowed to choose to move to the new chain where the rules are different, or stay where they are. If they choose to move their tokens, their actions are voluntary and within protocol. If they choose to stay, they can continue to live under the old rules. 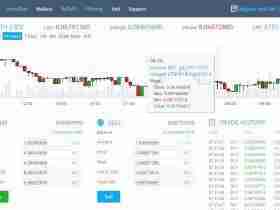 Yobit Crypto Exchange Review: It Is Good Or Bad?