Audius (AUDIO) is a digital streaming service that connects fans directly with artists and exclusive new music. It does this by being fully decentralized: is owned and run by a vibrant, open-source community of artists, fans, and api all around the world. gives artists the power to share never-before-heard music and monetize streams directly. With the API, developers can build their own apps on top of , giving them access to one of the most unique audio catalogs in existence. Backed by an all-star team of investors, was founded in 2018 and serves millions of streams every month, making it the largest non-financial crypto application ever built.

Audius (AUDIO) Coin Music creation and distribution have been dramatically changed by technology in the last two decades. Creating music no longer requires a team of producers and audio engineers; anyone in their bedroom can start with inexpensive software. Similarly, distributing music no longer requires factories that produce physical records and retail relationships for getting those records into stores; music platforms have enabled artists to distribute their own music. Though redundant in the age of digital distribution, the network of intermediaries and middlemen that formed in the early days of recorded music still persists, thriving on the back of artists and curators while the mechanics of value transfer and accrual are still largely obfuscated [1].

In 2017, the music industry generated $43 billion in revenue but only 12% of that made its way to artists [2]. As points of comparison, NFL players capture at least 47% of the revenue generated by the entire NFL [3], and NBA players capture between 49 and 51% [4]. Centralized user-generated music distribution platforms have succumbed to the influence of legacy institutions, struggling to find sustainable business models [5, 6] as existing institutions reap the rewards of their (and artists’) labor.

Audius platform tokens (ticker $AUDIO) have three prongs of functionality within the protocol unlocked by staking:

Audius tokens are staked as collateral for a value-added services. In exchange, stakers earn ongoing issuance, governance weight and access to exclusive features. tokens are staked by node operators to run the protocol, and by artists and curators to unlock exclusive features and services. Any $AUDIO staked within the protocol is assigned governance weight, used to shape future iterations of the protocol. tokens will serve as collateral for artist-based tooling as well. Early examples incubated by the include artists tokens, badges and earnings multipliers. In the future, fans may delegate tokens to and curators to share in their growth on the platform and the issuance of future tokens. Node operators must stake tokens to operate a discovery node or content node, with a larger stake correlating to a higher probability of being chosen by fan clients. Node operators receive direct upside from seeding in the form of $AUDIO and the possibility for future protocol fees for actively seeding the protocol. A community goal, via governance, is to ensure that tokens are always being funneled to the most value-added actors by using on chain metrics as a measurement, rather than simply to those staking the most tokens but not actively participating in the ecosystem.

With Audius, artists can generate immutable and timestamped records for their creative works, secured by an incentive-aligned decentralized network of node operators.

Unlock premium features for curated engagement by using our native platform token, $AUDIO. From gated content to artist tokens and remix contests, Audius is here to give fans the exclusivity they deserve.

As a platform owned and operated by its users, the future of Audius is entirely driven by $AUDIO governance. Everything about Audius is governable, with voting weight directly correlated to $AUDIO staked for value-added services.

Audius token will be distributed with fixed genesis allocation and by ongoing issuance modifiable by governance. The choice to launch with ongoing issuance is grounded in the desire to continually align the network’s growth with new actors and their relative contributions, rather than concentrating governance power in the hands of early actors. Should the community see fit, a portion of ongoing token issuance will be allocated to the most active users of the protocol, dictated based on platform metrics and varying contributions in the form of discoverability, streams and platform engagement. More details about this initial supply and issuance schedule will be provided in a separate specification document upon the release of Audios token on magnet

In future, the Audios community may choose to leverage 3rd-party stable coins to unlock paid content. These tokens are price-stable, providing a stable unit of account to ensure that artists, fans and node operators can participate in the Audius economy without concern for price volatility. Stable coins are divisible and freely transferable, allowing for highly divisible micropayments. This makes it easy for artists to set custom rates and for fans to issue fractional payments with little friction or rounding. A protocol fee may be captured as a percent of stablecoin transactions, including fan payments to artists. These fees would be aggregated into a pool governed by Audius token holders.

Files distributed through the protocol must be highly available, independently verifiable, and decentralized. These principles are key to ensuring democratic participation and accessibility for all users of the protocol. Artists sharing their tracks and metadata, fans retrieving content, and node operators will all share longer-form information via this protocol, while references to files in this protocol will reside in the content ledger. Additionally, the storage protocol must provide an equivalent user experience to existing centralized solutions and scale effectively as network demand increases. To that end, we propose AudSP: a decentralized storage solution for the Audius network built on IPFS (InterPlanetary File System). IPFS enables modular object-level encryption, global distribution capability, secure content addressing, and object immutability [7, § 3.5.4]. In order to ensure high availability for files stored through the Audius protocol, AudSP provides a staking-based incentive structure for users to host network content.

What Is Navigator(NTTC)? Complete Guide Review About Navigator. 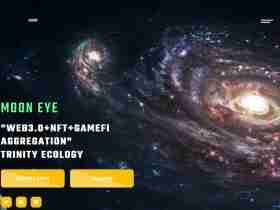 What Is MOONEYE (ME)? Complete Guide Review About MOONEYE.