The protocol was launched on July 10th, 2021 through the Binance Smart Chain (referred to as BSC). The token contract employs a static reward system: 10% of every transaction is split into four parts: The first 2% part is distributed to holders, the second 2.5% is used to fuel the liquidity pool on the Pancake Swap decentralized exchange, 3% is burned, and the final 2.5% would be sent to Adamant charity wallet. Throughout every quarter, a poll will be open to all users to vote on a charity nature wherein the winning charity nature will be receiving all tax received into the charity wallet throughout that quarter.

Adamant The token is launched with the idea of creating a community token with a self generating income mechanism for its owner while allowing the same owners be a part of donating to the community charity of choice for the quarter. The static rewards system is a concept that was pioneered by reflect.finance and popularized by Safe moon. Adamant Mine will also be released. It will be play-to-earn defi game which enables users to “mine” Adamant blocks. For every block mined, the user will earn 2,000 ADMC tokens, donate 2,000 ADMC tokens to the charity wallet, and burn 8,000 ADMC tokens.

This leads to the game’s tag line of “Play to Earn, Donate, and Burn”.It is a great alternative to the usual high-APY liquidity farms out there because of its unusually sustainable approach. The reward amount is conditional upon the volume of the token in the marketplace, thus alleviating sell pressure put on the token by early investors. In addition to all aforementioned, the mechanism encourages token holders to hold on to their tokens in order to earn taxes from the transactions on the market, which is based upon the percentage specified in the contract and dependent on the total tokens held by the owner.

Adamant employs an automatic liquidity pool algorithm (AutoLP) in its token contract. As mentioned above, the network collects 2.5% from each transaction, whether the order is a buy or sell and adds it to the LP. This also acts as an arbitrage resistant mechanism that secures a portion of the volume of Adamant as a reward for the holders. The intended goal is to minimize price movements when large wallets decide to sell their tokens in the future, which when compared to coins without an AutoLP system, leads to a reduction in significant price fluctuations.

Adamant is designed to be secure. As mentioned above, our token distribution is one of the healthiest ones currently available, with no whales controlling outlandish amounts of the circulating supply. In addition, the Adamant smart contract has implemented two important security features, aimed at making the token fully autonomous and immune to malicious manipulation. Fraudulent blockchain-based schemes running on BSC are rife, and this company take steps to ensure that Adamant is as far from that space as possible.

Adamant differs from the rest of the De-Fi crowd because it has a passionate team working full time to develop a fully-fledged ecosystem of applications surrounding the token. This aim to not only have a financially appealing cryptocurrency asset for short-term traders, but a suitable long term asset for serious long term investors. Adamant is a yield-generating contract that rewards its holders.​

Adamant belongs to the community and will use its new and restructured team to elevate its status in the De-Fi space, where they intend to reach new, exciting and promising opportunities in markets worldwide. Behind the project is a highly specialized team that dreads the lack of transparency present in other De-Fi coins and is determined to change the status quo with Adamant. Check out your updated road map below, which they will be fulfilling over the remaining year of 2021. 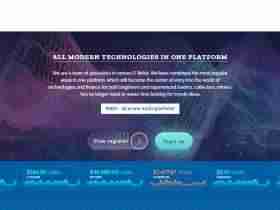